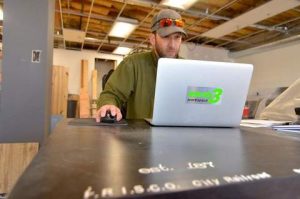 It’s been a long, hard road to opening day at Evo3 Workspace in Frisco, but founder Aaron Landau believes it was absolutely worth it.

Today marks the official grand opening of Evo3, the town’s second co-working space to open in the past year. Doors open at 6 p.m. for a free kickoff celebration, with tours, live music and refreshments. The event is open to the public and wraps up around 10 p.m.

“This certainly took longer than we planned, but when you look at the final product, what we have is a purpose-built co-working space,” says Landau, who acted as designer and general contractor during the five-month remodel. “That was really the key, is to design every square inch of this place with co-working and techs in mind. That’s why it took us longer than expected, but the end result is really remarkable.”

Landau invited a close friend from California, Scott Thorberg, to kick things off in style with live music throughout the night. Thorberg also created art for the space that will be on display at the open house.

Once Evo3 is open for business, memberships begin at $215 per month for a private seat. The seat comes with a slew of amenities, including charging stations, two lounge areas, an attached kitchen, on-site ski storage and, of course, the lifeblood of any entrepreneur: high-speed wireless Internet. The space also has options for reserved desks, private offices and onetime meetings in the large conference room with views of the peaks overlooking Lake Dillon.

The space is already attracting curious start-ups looking for a comfy, welcoming place to get their ideas off the ground. Roughly 15 locals have already signed up for memberships, including four of the six private office suites, and Landau expects another five or so in the next week. There’s no cap on the number of memberships, and the founder has already seen interest from Denver residents ready to make the move to Summit County.

“We’ve had a lot of folks from the Front Range reach out to us,” Landau says. “We’ve found they come up for the weekend, ski, hear about our place and realize, ‘Hey, we can live and work here.’”