On the east end of Frisco’s Main Street, a construction crews rips up the road.

And behind a series of large glass windows in Suite 6 at 620 E. Main St. — which offers a front-row view of the roadwork — another project is under construction. The indoor project involves putting the finishing touches on what will be Frisco’s and Summit County’s second coworking space, Evo3 Workspace, and it represents one man’s dream of transforming the economy of a region dominated by tourism. 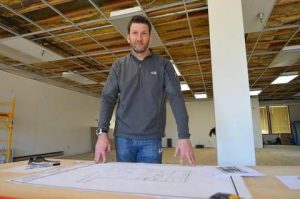 Aaron Landau, one of the minds behind Evo3, refers to himself as a corporate refugee. He’s spent the bulk of his professional career in the medical device industry in St. Louis, working for companies like Cardinal Health and Boston Scientific. He specialized in selling devices for arrhythmia, which is a form of irregular heartbeat. It was a lucrative business to be in, but he also felt like something was missing, that magical combination of high quality work and a high quality of life.

“When you’re in corporate America it’s definitely difficult to allow your creativity to come out,” Landau said. “I had bought a vacation home in Keystone about five years ago. I finally decided I have a place out here, I’ve got my yellow Lab and I’m happiest when I’m out here.”

So two years ago, he parachuted out of corporate America and into the High Rockies like a member of the 10th Mountain Division.

“I refer to myself as a corporate refugee because I came out here not knowing what I was going to do,” he said. “I’d lived in St. Louis all my life. It was shocking to a lot of my friends and family.”

After helping launch a ski boot company his first year here, he got the idea to try something different. He wants to create a high-mountain tech hub in Summit. And he plans to use the coworking space to help achieve that goal.

Landau started by spending time at coworking spaces in Boulder.

“Coming from a place that was filled with pressure on sales and deadlines to a place where people are coming together for a casual and collaborative effort — it was very foreign to me at first,” he said.

He then started traveling to coworking spaces all over the Front Range. Now he’s attempting to incorporate best practices from all those spaces into a new coworking space developed specifically to bring in tech workers.

“Our economy here is not very diverse,” Landau said. “About 90 percent of it is tourism and construction. Our main goal is to bring a tech hub out here.

“The infrastructure for tech has gotten a lot better. Some resorts and condos don’t have great infrastructure, but Frisco does. That’s why we chose this location. It’s also by the highway and the lake, and it’s not a resort town.”

The High Rocky economy has been transformed once before. In the 1950s when Chicago entrepreneur Joseph Paepcke started collaborating to transform Aspen into a cultural center and a ski haven, locals never imagined anything could overtake the mining industry. About 70 years later, arts and tourism have taken over and the mining industry is little more than dilapidated remnants on forgotten slopes. So another transformation of the local economy is not out of the question. Just like tourism and the arts did, it could serve to make it stronger.

Landau emphasizes how the collaborative technique in technology creates a natural advantage.

“Back in the 1990s, on one side you had Silicon Valley at Palo Alto with Stanford,” he said. “And on the other side you had Boston with MIT, and a lot of tech companies were there as well. At that time Boston could have become Silicon Valley. The difference between the two is in Silicon Valley it was illegal to have non-compete and non-disclosure agreements.”

So in the Northeast all tech companies were using every legal means at their disposal to keep all new developments as private and secretive as possible. It was just the opposite out West.

“You had people from Oracle going to Microsoft and people from HP going to Oracle and vice versa and they were all sharing these best practices,” he continued. “And that is the reason why a lot of people today believe Palo Alto became what it is today, Silicon Valley. It’s that collaboration piece that drives growth.

“Corporations are finding that being in a cube and siphoned off from everybody is not the way to grow anymore. So you’re starting to see more and more of these spaces popping up all over the place. There has been a shift to a mobile culture. Tech guys don’t have to be in the office. You can now recruit from anywhere in the world. As a tech professional you could get put with a group up in Summit County, meet up with other people and have a wonderful quality of life.”

Diversifying the economy could make it more sustainable. As profitable and as crucial as tourism has been, it is dependent on uncontrollable forces like the weather.

“When I moved out here, everyone I met thought I worked on the mountain, worked for the resort,” Landau said. “Everybody here is either a Realtor, CPA, in construction or works on the mountain for a resort. That doesn’t have to the case anymore. We know people want to be out here. This is great place to play, and it’s not a bad place to work, either. It’s a great quality of life.”

There is already a lot of intellectual horsepower and a sufficient amount of financial and human capital in Summit. But he knows he has to attract more to the mountains to create a new economic sector.

“We have to pull from outside Summit County, too,” Landau said. “If you look at occupations in Summit County, less than 5 percent of the workforce is professional.

“We want to get people who want to be out here to move out here. It’s going to be possible now with mentors, advisors and networks. We already have a collaboration of very smart people from here, Eagle County and t 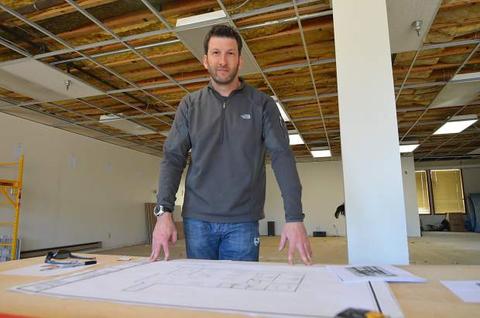 “As soon as people walk in the door and they become a member their network just explodes.”

The shifting attitude of the younger generation is also a factor in creating a new economy.

“The millennials really care about where they live,” Landau said. “I’m almost 40, and I remember when I came out of college I was willing to go wherever the job was. I remember saying ‘I’m geographically flexible’ in job interviews. And that was because it was all about the job first and the place you live second. But now, with millennials, it’s more about, ‘I want to live where I want to live first.’ The balance is much more relative to the whole outlook. It plays in really well to what we are doing because that’s who we want to attract, too.

“To be able to live here and to have the chance of driving a new economy and diversifying the economy — it’s really exciting to be a part of that. We want to create the perfect work-life balance,” he said. “This is the place you can have it.”

And as the construction crew continues to hammer, paving the road outside, Landau hopes to build a path to a whole new way of life inside Evo3, which should be ready for business in about two months, not long after the ski season begins.