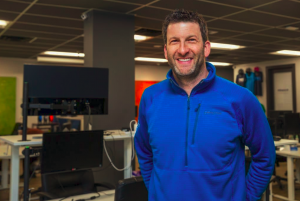 FRISCO — As Aaron Landau recalls it, the germ of an idea that became the EVO3 Workspace’s K-12 kids coding program came to mind like so many great ideas here in Summit County: over a couple of beers.

While sipping suds with his friend Peder Hansen, then the STEM coordinator at Frisco Elementary School, Landau told Hansen about how his EVO3 coworking space on Frisco’s Main Street was looking for a way to get involved in education for the community. Landau also relayed to Hansen how he thought working with the community could be a win-win for local education and EVO3, as the coworking space was looking for more exposure after its launch in March 2015.

“So we found workbooks from a startup company out of Boulder, Bitsbox,” Landau said. “And we started using their introduction to Javascript app development workbooks and built a curriculum around that.”

In late 2016, Landau, Hansen and Summit County Realtor Phil Mervis founded the EVO3 Foundation. At the heart of the nonprofit’s core mission is the Code Beetle kids coding program. Landau said the program most directly works with fourth and fifth grade students at Dillon Valley, Frisco and Summit elementary schools.

Thanks to Hansen, Summit Cove Elementary and 15 of its students served as guinea pigs for EVO3 Foundation’s Bitsbox Code Beetle pilot.

“We know that the opportunities are in STEM,” Landau said. “But we … don’t know or are not teaching the right skills to fill these future, or even current, jobs. And that’s what we are trying to do. We’re trying to address that very early on.”

“It was a lot of kids,” Landau said about the remote and on-site EV03 classes he taught with Hansen and Mervis.

“As a STEM coordinator,” Hansen said, “we really try to bolster our science, technology, engineering and math instruction. And we can’t all be experts and know everything. And that’s where we all need to bring the experts that will work with kids and teach them the skills they’ll need for the 21st century and even more than that. We need kids to strive in an environment where they can create, think critically, where they can be creative, and I think that’s one of the things that coding can do for kids.”

To understand why Landau wanted to branch out into kids coding education, you must first understand the spirit — his spirit — behind EVO3.

“EVO3,” Landau said, stands for and signifies the three evolutionary industries here in Summit County. First, there was mining, which came and went. Currently, skiing and outdoors tourism is the heartbeat of the local economy. Looking ahead, Landau is hopeful and confident technology can be a third evolutionary industry in the area.

The EVO3 Workspace offers myriad daily, weekly or long-term working spaces and office-like conference rooms that work-from-home or remote-working professionals can use.

When Landau relocated to Summit County a few years back, he wanted to bring with him the kinds of coworking spaces he saw on the Front Range. In March 2015, the EVO3 Workspace opened, providing a modern environment — complete with beers on tap — that talented young professionals could enjoy.

That said, Landau still wanted to increase public awareness of how his workspace could help benefit the local industry and its people.

“We saw a need years ago for really diversifying the local economy,” Landau said. “We see all of our eggs in a couple of baskets. It’s a tourism industry, which is very service based. You have real estate, so these are incredible volatile industries. And completely understanding our towns run on sales tax and everything else and having an appreciation for that, we want to attract the people who are going to not only take advantage of this incredible lifestyle but also contribute back to the community, and tech has always been our focus.”